Weekdone is all about making you a better manager or employee. Using Weekdone makes teams and companies better. That's our core mission. We use world's best practices in management and communication to achieve this. We help you plan, focus, be more productive and communicate with your co-workers.

Last year we launched summaries – a way to quickly see how well someone has been doing during a week. Based on lessons learned from our users we have spent the last months to re-engineer the whole system.

Today we're happy to introduce rewards that replace the old summaries. Rewards motivate your people throughout the week to use Weekdone for the benefit of the whole team. Rewards are a list of goals or accomplishments each user should do in a week. You get a goal done and a grey icon badge turns into blue or a green one appears. The dashboard then shows who has reached each goal and who has not. 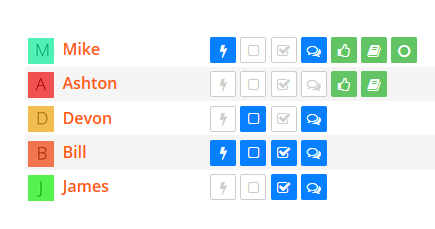 As an example, let's take the "Active" reward. It's given for number of total new items entered per week. Set it at 6 and it means each of your people should add at least 6 items to share with co-workers. Want to be more granular? Activate the "Planner" and "Progresser" badges instead, setting them at 3 and 3 instead, requiring people to enter 3 plans and 3 progresses as a minimum.

Here's the initial list of rewards we're starting from:

For example, the badges can be used to track:

In addition, there are available optional rewards:

All these can be enabled and customized in the rewards settings page.

Let your people know how many items they should share, how big % of plans should be moved to progress, how many comments to give to co-workers or often they should visit Weekdone. As a manager, you'll always know who has been up to the task and how to improve the person's productivity. Your people on the other hand will know what’s expected from them.

In the future rewards will include much more and we keep developing them further, so that you can set additional goals based on your company needs and culture. How about rewards based on sales results or bugs closed?

What's the difference between blue and green rewards? The 4 blue ones are something that's required from each user. The blue ones are always in front of the user in their form and report dashboard, to remind they have to be done. Each company can decide which 4 to choose. Green ones are nice to have ones, like a bonus.

Rewards can be customized on the rewards settings page by the company account administrator. Go choose the ones you decide to use and set the goal limits.

What would you like to measure and reward in Weekdone in your case? Let us know here or in our other channels.

Keep Everyone on the Same Page with the Weekly Team Summary

Learn more about our new feature, the Weekly Team Summary, and how it can help your teams stay in sync about what is happening.

All business activity really comes down to two simple things: making decisions and executing on decisions. Your success depends on your ability to develop speed as a habit in both

Introducing due dates in Weekdone

You can set the due date in the future for older plans to not count them as overdue. Don't cheat, be realistic.

Weekdone is a tool to help you improve your personal goal-setting. Read to find out more how Weekdone can change the way you set goals.