5 Toxic Team Members And How To Handle Them

Teamwork is good. Teamwork is great. Teamwork helps you get better results, generate better ideas and come out with innovative solutions. There’s a reason most people who get some kind of award say it’s thanks to their team.

Teamwork is about working together and communicating. 75% of employers rate team work and collaboration as “very important”, yet only 18% of employees get communication evaluations at their performance reviews.
Yet, a lot of people hate it. As in most teams there tend to be some, or (God forbid) many, people who slow you down, irritate you or are just plane useless.

Here are a few of those archetypes, enemies of teamwork, and the best ways to handle them as a leader or as a co-worker.

Make no mistake, people with these traits may still be the very best in their field, they just lack social skills. They can usually be taught how to perform better in a team. They can also just be manipulated to be good at it.

That’s why I’m writing under the assumption that you can’t fire them. Even if you could, it’s usually not the best solution. Most people can be made to contribute to the team with a lot less cost that it takes to find and train a new team member.

People tend to promise more than they deliver. They may not even do it intentionally as it’s easy to promise things. Often, when big promises are made (especially in team meetings), you find out later that people can’t deliver.

The best and safest way to deal with that is to take everything with a grain of salt. If you assume that less gets done than promised, you’ll never be disappointed and you may be positively surprised.

There are people who interpret the shared responsibility of teamwork as “everyone else is responsible.”

These people can sometimes be motivated by giving them a chance to lead, to make them responsible about something they care about. Yet, if they have a track-record of laziness, it’s better to keep an eye on them. Just don’t let them know, you do. Then they’ll feel that they don’t have to work as you’ll do it for them anyway.

Some people crave praise. So much so, that when something is done, they need to be the one who takes the credit. Unfortunately, they are never so eager to take the blame if something goes wrong.

Although, it may seem evil, they tend to stay quieter when they’ve forced to take the blame a few times and understand that beiing the centre of attention may not be that good a thing.

Nothing brings the morale down faster than someone finding fault in every little thing. These people are toxic as they tend to spend most of their time on criticizing instead of actually working and doing something useful.

The easiest way to deal with them is to give them so much responsibility and tasks that they don’t have time for whining.

And some people completely fail to grasp the meaning of the world “team.” They care for only their own ideas and dismiss recommendation.

You can still use them by putting them to work on parts of the project where they can do their own thing. It’s safe to isolate them from brainstorming and group activities as they work best alone anyway.

Teamwork is about communication.

When it comes to teamwork, most problems can be tackled with good and inspiring leadership and high levels of effective communication.

It’s important to have clear and concrete goals. The best methodology for setting goals is probably SMART goals.

SMART goals make sure all the sub-tasks a team must tackle contribute to the whole and can be measured. Basically it makes sure you don’t waste time on mundane tasks.

You also need a good reporting tool for every team as otherwise people don’t know what’s going on you spend way to much time on ineffective meetings.

HBR writes that a key to great teams is constant and engaging communication. This can only be done with clear goals and reporting

Everyone in a team must understand that they work for a same cause and that they’re doing it together. Emphasizing this point through everyday communication (instead of long lectures and semi-inspiring speeches) is the only way to get all the toxic people behind one cause.

Improve communication in your team or company 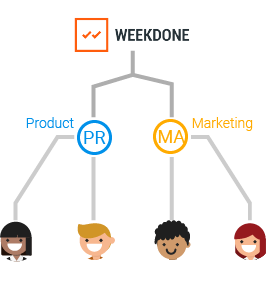